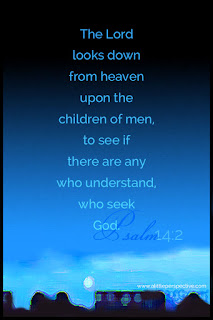 From heaven the Lord looks down on the earth.

God was tempted to destroy the human race — and with just cause! And he almost did; but not completely. It would not have been consistent with his character as the Creator and Lifegiver. (Not that we had any way of knowing that until he revealed it). Now God tells us that we, as formed in his image, must value life as much as he does. In particular we must value the life of any other creature formed in his image; that is, of every human being on earth. As “stewards of creation: we have a special responsibility to respect life and to work to enhance the life of every human being living in conditions unworthy of people made in God’s image.

From humans in regard to their fellow humans I will demand an accounting for human life. If anyone sheds human blood, by humans shall that person’s blood be shed; for in his own image God made humankind

There is a contradiction here we need to deal with. If human blood is not to be shed, why is God saying humans will (“shall”) shed the blood of other humans who do? Murderers are still humans, made in the image of God. Is that image to be respected or not? When the bishops of the United States declared together, in union with the Pope, that the death penalty should be abolished, were they editing God?

We have to read Scripture as what it is: “the Father who is in heaven meeting his children with great love and speaking with them.” The Father meets his children “where they are at,” and speaks to them in ways their present state of culture and development enables them to understand. In particular, in the literary form we call “myths,” historical or factual consistency is not expected, even in the stories God tells. We look for the main point. And here it is the absolute sacredness and inviolability of human life.

In the story, God did not respect that when he sent the Flood. But now he promises, “Never again!” That is the whole point of the story: not whether God actually wiped out people in a flood, but that God says this is something he will never do. And we who are in his image must never do it either. Rather, humans are to foster life: “Be fertile, then and multiply. Abound on the earth and subdue it.”  Or “be master of it.” Other translations say, “Teem over the earth” and “multiply.” It is clear that humans, who are in the image of God the Creator, are expected to love life, foster it, and make the planet life-friendly. We are in charge, and our first concern should be life.

God said, “See I am making a covenant with you and your descendants.... with every living creature....”

Noah was not asked to commit from his side, because God was making the covenant “between me and the earth... and all that has life on the earth,” not just humans. God swore “that the waters shall never again become a flood to destroy all mortal beings.”

And this, the inspired storyteller told the children around the campfire, “is why there are rainbows. They are a reminder of God’s promise.”

Who is to say they are not? So we know the physics that explains rainbows. Big deal! We can know the scientific explanation of every phenomenon on earth, and we still won’t know the half of it. “From heaven the Lord looks down on the earth.” We need to see what he sees. For this we read his word.

Meditation: Do I feel responsible for fostering and enhancing all life on earth?