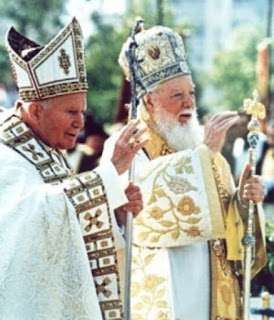 The Responsorial (from Jeremiah 31:10-13) is a promise for all time: “The Lord will guard us as a shepherd guards his flock”.

In Ezekiel 37:21-28 God is promising to restore unity to his People by uniting the tribes again as they were under King David.[1] But it was under the kingship of the promised “Son of David” that true unity would be restored; not just to Israel, but to the human race. The “miracle of tongues” at Pentecost was a sign and preview of this, when God reversed the Tower of Babel by letting people present “from every nation under heaven” understand the apostles speaking the “language of the Spirit.”[2]

Paul announced God’s “plan for the fullness of time, to gather up all things in Christ, things in heaven and things on earth.” Paul was sent to the Gentiles so that through him Christ “might create in himself one new humanity in place of the two, thus making peace”:

So then you are no longer strangers and aliens, but citizens with the saints and members of the household of God... with Christ Jesus himself as the cornerstone... in whom you also are built together spiritually into a dwelling place for God.[3]

This unity was broken by the schism between Catholics of East and West, and by the Protestant Reformation. We can never rest until unity is restored. What is holding it back?

It is an axiom in most organizations that “the buck stops” at the top. John Paul II may have been thinking this when he said that if his way of “exercising the primacy” was keeping the Eastern Rites separated, he would change it. “This is an immense task, which we cannot refuse and which I cannot carry out by myself.” He asked for “a patient and fraternal dialogue... in which, leaving useless controversies behind, we could listen to one another, keeping before us only the will of Christ for his Church and allowing ourselves to be deeply moved by his plea ’that they may all be one...’”.[4]

This sets a principle for all renewal in the Church. The authorities — bishops, pastors and lay professionals in charge of various ministries — have more power than anyone to bring about reforms, but without the committed participation of everyone else, lay and cleric, it will be “too little, too late.”

John 11:45-57 tells us that when the high priest said, “It is better to have one man die than the whole nation destroyed,” he unknowingly “prophesied that Jesus would die for the nation... and to gather into one all the dispersed children of God.”

So what are you willing to do to bring about unity? In your home? Parish? School? Workplace? With other Christians? With Muslims” Other non-Christians? The non-churched? What would you have to “die” to? If all are as willing as Jesus was, then “the Lord will guard us as a shepherd guards his flock.

Initiative: Strive for unity. Believe in each one’s grace. Hope for change. Love.