“The Lord has set his throne in heaven” 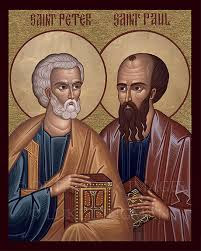 “The Lord has set his throne in heaven”
The Responsorial Psalm invites us to confidence: “The Lord has set his throne in heaven” (Psalm 103).
Acts 25: 13-21 show how God works through events to fulfill his own plan. King Agrippa said that Paul “could have been set free if he had not appealed to the emperor.” But God’s plan was for Paul to go to Rome and bear witness there. Why?
It may have been so that Peter and Paul would both die there. Peter and Paul could have divided the early Church. Peter had the “primacy” of juridical authority in the Church, the “keys of the kingdom.” He was the protos, the “first” among the his­torical group Jesus had gathered during his earthly ministry. But Paul had the authority of his direct call and commission from the risen Jesus to evangelize the Gentiles (Acts 26:16-18). He was raised up
by the Spirit of the risen Lord to bear witness above all to the primacy of an inward communion of faith and love, the perpetually new work of the Spirit…. There we have what we might call ‘the primacy of Paul.’ It was charismatic rather than institutional. Paul bore witness to the absolute, radical authority of the Word over everything and every­one…. [His] unique calling shows how God’s grace transcends every institution.
Here were two courses set for collision. But Peter and Paul remained united and died in communion with each other in the same city:
The two ‘primacies’ met at Rome, intermingling in the blood of martyrdom. There the ‘glorious witnesses’ welded into one communion the leadership of the protos [Peter] and the authority of the prophet [Paul]. Hence the privilege of this local church, and… her special calling: the communion of the witness of Peter and that of Paul which had been entrusted to her — engraved in her, so that she became the ‘living memory’ among all the churches. Her bishop would have the responsibility of becoming guardian of and spokesman for all that is implied by such a privilege and calling. 1
That is why the bishop of the church in Rome inherits Peter’s function of keeping the whole Church united, faithful to the unity to which their death bore witness. The pope must listen to the voice of the Spirit in the prophets, and the prophets must listen to the voice of his authority.
In John 21: 15-19 Jesus gives to Peter, and thus to every bishop and member of the Church, the Great Commandment of pastoral ministry: “Feed my sheep.” The goal that guides the interpretation and application of every rule and policy in the Church must be to nourish and nurture the flock, to lead them to the life-giving pastures of Christ’s words and sacraments. Above all, pastors should fear the sin of denying the Eucharist to anyone unnecessarily. The words of Jesus are clear: “If you love me, feed my sheep.”
1Tillard, O.P., The Bishop of Rome, Glazier, Inc., 1986, pages 74-117.


Initiative: Be a prophet like Paul: preserve unity with the Church and bishops.

Email ThisBlogThis!Share to TwitterShare to FacebookShare to Pinterest
Labels: “The Lord has set his throne in heaven”, Fr. David M. Knight; Immersed in Christ