We are Called to Bear Fruit by Living Union with Jesus 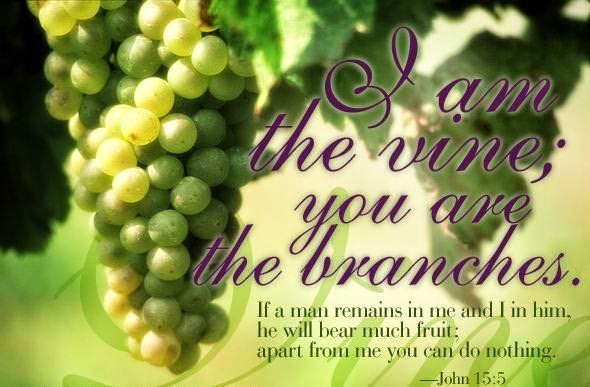 We are Called to Bear Fruit
by Living Union with Jesus

Inventory (Fifth Sunday of Easter, Year B)
The Entrance Antiphon invites us to: “Sing to the Lord” because he has “done marvelous deeds” and “revealed his saving power” (Psalm 97). What “marvelous deeds” of God have I experienced? How do I see his “saving power” revealed in the Church and in the world today?
Input
In the (alternative) Opening Prayer we ask God to “give us voice to sing your praise.” Why? Because God has “revealed to the nations” his saving power and “filled all ages with the words of a new song.” The spirit of the Church is a spirit of praise for what God is doing and has done — and is doing still through us.

The Challenge of Grace:
The Responsorial Psalm tells us that when the Church assembles, the pervading spirit should be praise: “I will praise you, Lord, in the assembly of the people” (Psalm 22).
But in Acts 9: 26-31 we see that praise presupposes something. It presupposes openness to the “more” of God and to the blessed challenge of living “life to the full” by grace.
Saul (renamed “Paul” in Acts 13:9) caused panic when he tried to join the Christians he formerly persecuted. They “refused to believe he was a disciple.” But the real trouble came when he preached Jesus to the Greek-speaking Jews in Jerusalem. They “responded by trying to kill him.” What was their problem?
It was another kind of fear: fear that Saul was destroying their way of life, introducing change into their religion, calling into question the rigidly secure, unshaking structure of their religious laws. Jesus was a threat, because Jesus called them to be more than Jews; that is, more than adherents to a particular cultural embodiment of God’s revelation. Jesus was calling them, not to deny what they knew, but to go through it and beyond it in order to know God more deeply. And Saul was speaking for Jesus.
We have the same problem today when people, instead of finding joy in church, praising God because he has “revealed to the nations” his saving power and “filled all ages with the words of a new song,” prefer to focus on the sustaining discipline of rules and regulations. They seek assurance from a checklist of freeze-dried doctrines and simplified moral observances instead of opening themselves to the boundless challenge of responding to the infinite truth and love revealed in Jesus Christ. They try to “kill” any voice that shakes the structure or “opens the windows” (the phrase of John XXIII when he called for the Second Vatican Council) to clearer, deeper understanding of the un-codifiable revelation of God. Their devotion is to desiccated doctrines instead of to the living voice of Jesus who, though “the same yesterday and today and forever” (Hebrews 13:8), continues to “fill all ages with the words of a new song” as the Church reflects more deeply on Scripture and revisits the roots of her tradition. They are dry branches devoid of fruit. They come alive only to stone the prophets.
The Law of Love
1John 3: 18-24 tells us to stop talking so much about what is right and wrong in the Church, and to concentrate instead of living out the love Jesus taught us: “Let us love in deed and in truth and not merely talk about it.”
This is how we know we are “orthodox” and “committed to the truth.” To know if we are “at peace” with God we have to ask if we are at peace with our own consciences — and with others.
John doesn’t recommend we measure our behavior against a whole checklist of laws. We can lose the forest for the trees by doing that. He tells us to go straight to the “law of all laws”: the law of love. Jesus’ commandment “is this: …to believe in the name of his Son, Jesus Christ” (that is, to build an intimate relationship of friendship and love with the person of Jesus above all things) and to “love one another as he commanded us.” If we do this we will experience the “fruit of the Spirit” — “love, joy and peace” (Galatians 5:22). This is the first fruit of grace.
“Live on in me”
The Christian religion is not a religion of doctrines and laws, or even of “love” understood as a human virtue. Nothing we believe or do can make us Christians. To be a Christian is to receive a new life. The word “grace” means “the favor of sharing in the divine life of God.” The only way to be “Christian” is to be “in Christ” as a member of his body.
In John 15: 1-8 Jesus makes it clear that in Christianity everything depends on being united to Christ. “I am the vine, you are the branches… apart from me you can do nothing.” The first, middle and last thing a Christian should be asking all day long is, “Am I doing this in union with Christ? On this job, on this date, in this conversation, in this undertaking is Christ acting in me and through me?” If not, then the words of a famous American apply, “I shoulda stood in bed!”
Our goal as Christians is to live always — as much as possible, as deeply as possible, as constantly as possible — in conscious union with Jesus Christ, who is living in us as we are living in him. He is the vine, we are the branches. We can do nothing except by his life coursing through us, which means his thoughts inspiring our thoughts, his voice speaking through our words, his love expressing itself though our love, his goals, principles and values directing every choice and decision we make. “If you live in me and my words stay part of you, you may ask what you will” – and we will “bear fruit” that renews the world!

Insight
How do I – or could I — remain conscious of acting in union with Christ all day long? What can I do to make his “words remain” in me?


Say frequently throughout the day, “Lord, let me think with your thoughts and speak with your words and act as your body on earth!”

Email ThisBlogThis!Share to TwitterShare to FacebookShare to Pinterest
Labels: We are Called to Bear Fruit by Living Union with Jesus