“Your right hand has saved me, O Lord” 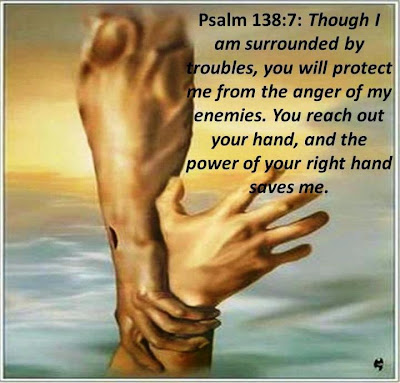 “Your right hand has saved me, O Lord”
From a basis of experience the Responsorial Psalm declares a basis for hope: “Your right hand has saved me, O Lord” (Psalm 138).
The earthquake in Acts 16: 22-34 that opened the prison doors was a minor revelation of God’s power. The conversion of the jailer was a major revelation. God reveals his power when he uses it to accomplish his own purpose, which is the conversion of the human race.
In every age, people’s failure to believe in Christ or to continue as active members of the Church tempts us to discouragement and doubt. Sometimes the statistics make Christ appear to be a loser. That is when we have to look at a broader picture.
In any particular time or place the faith can flourish or decline, influenced by many factors. Human circumstances — wars, disasters, poverty, or sickness — can make some people more receptive to the Good News of salvation. And the same circumstances can incline others to ignore the Good News or reject God. Human circumstances do play a part, but in the whole picture of things they play a minor part.
People might go the church or “profess the faith” because it is something their culture, family or friends take for granted; or because they are scared or unhappy and seek comfort from God. And they might stop going to church for the same reasons: because their friends don’t go, or they don’t find the comfort or help they were looking for. Either way, it is relatively unimportant, because anything they do for human reasons is outside of their relationship with Jesus Christ. If they go to church for human reasons this is not a sign of graced interaction with him. And if they stop going, this could mean they had faith and gave it up, but more probably it simply says they never did have a faith that was personal, conscious and real. God has neither won nor lost; the game just wasn’t being played on his field. His is the field where grace is at play.
In John 16: 5-11 Jesus tells us it is the manifestation of the Spirit, not judgment passed on human evidence, that shows whether God has won or lost. Humans judged Jesus guilty of sin and condemned him. By human standards his execution made God appear to fail in bringing about justice. But when the Spirit brought the Church to life and empowered her witness, we saw Christ’s condemnation reversed by a higher court, and justice being done on the only level that ultimately counts: God’s level. Action that is inexplicable without grace bears witness to the Spirit and only this lets us say unambiguously, “Your right hand has saved me, O Lord.” This is what we rejoice in.

Initiative: Be a prophet. Live unambiguously by Christian faith, hope and love.

Email ThisBlogThis!Share to TwitterShare to FacebookShare to Pinterest
Labels: “Your right hand has saved me, O Lord”