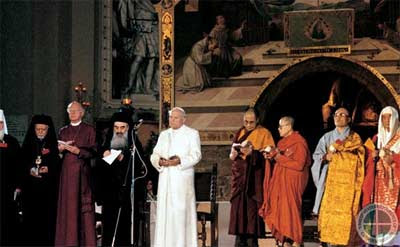 Probably most fights start over issues of property, power and prestige. But there is also something in us that makes us see anyone who is different as a threat.

A sociologist once asked his class to make two columns listing “Them” and “Us.” In the “Us” column, no one included “the human race.” Jesus would have.

John, whom Jesus nick-named “Son of Thunder (Mark 3:17), said to Jesus, “Teacher, we saw someone casting out demons in your name, and we tried to stop him, because he was not following us.” John didn’t look at what the man was doing — the fact he was “casting out demons” — but just at the fact he didn’t officially group with the disciples. John wanted to stop him from giving people the impression that he had any relationship with Jesus. Jesus said not to stop him. Then he taught another fundamental principle that Christians, with most other people in the world, have yet to accept: “Whoever is not against us is for us.”

Jesus sees an ally in everyone not identified as an enemy. Christians take sides against other Christians: Catholics vs Protestants, “conservatives” vs “liberals,” Latin-Massers vs those who embrace the reformed liturgy, strict rule-keepers vs those free to adapt. When is this a legitimate, or even necessary, defense of truth, and when is it sinfully divisive?

Jesus did not forbid disagreement but hostility; argument can be simply inquiry. There is nothing wrong with arguing, so long as we accept each other and do not go to war against sincerity. The Pharisees who questioned Jesus did not wait for answers or respond when he gave them. They were just against him.

Jesus told us to weigh results. “You will know them by their fruits. Are grapes gathered from thorns?” (Matthew 7:16). If people are “casting out demons,” they are not people we want to cast out, even if they are partially in error. Not, at least, if they are “for us” in what we are basically trying to do. Jesus said God will reward anyone who “gives you a cup of water because you bear the name of Christ” (Mark 9:41). Why should we not be grateful for all who accept us as believers and accept them in return?

One thing we can always do is pray together. And share our experiences of God. We can simply not focus on doctrinal differences until we know we are united in heart. This lets the Spirit act.

Initiative: Give God’s life: Pray together before you argue. You may find you don’t need to argue.