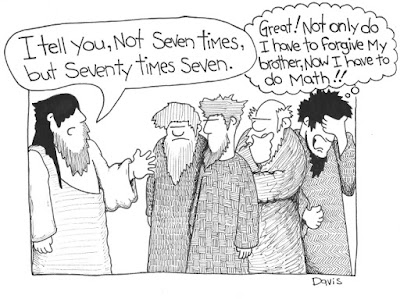 Offer to God a sacrifice of praise

Genesis 4:1-25 tells the story of the first murder on earth. Brother murders brother, which may be Scripture’s way of saying every murder is this. When Cain asks, “Am I my brother’s keeper?” the obvious answer is not restricted to blood relations. We are called to love and care for all as brothers and sisters. And if we kill anyone, for any reason at all, we need to be aware that it is our brother or sister we are killing. Already, at the very beginning of Scripture, we are told something that should give us second thoughts about the death penalty and war. When we celebrate military victories, we are celebrating that fact that — whether we thought it justified or not — we have killed our brothers and sisters. It is significant that those who have actually been in combat, who have seen the reality first hand, are not the ones most inclined to celebrate.

Cain killed out of envy. Jealousy is to want what another has. We are envious when, if we can’t have something, we don’t want the other to have it either. That sin can be deadly. This reading explains the origin of the blood feud. What deterred people from killing in “primitive” times was the certainty that, if they did, the victim’s relatives would come after them and their family until one death resulted in “seven.”  The number seven is significant in almost every culture, but the reason is obscure.

In the Bible it means totality, fullness, completeness. At times it is multiplied by itself (7 X 7 or 7 X 70).... This signifies the removal of limit implied in totality. Thus Cain is avenged 7 times, Lamech 7 X 70 (Genesis 4:24).... The 6 days of creation followed by a 7th day of rest are the complete and perfect work....

In the blood feud killing continues until vengeance is “complete.” Except it never is, whether between individuals or nations. So the Gospels apply the number to forgiveness.

In Luke forgiveness should be given seven times. Matthew says 70 X 7 to clarify that “the perfection of forgiveness signified by 7 [in Luke] consists in the removal of any limit to the number of times one should forgive.”[1]

That is the teaching of Jesus. But in Genesis things get worse before they get better. Cain kills brother out of brooding envy. Lamech boasted later: “I have killed a man for wounding me, a young man for striking me.” Cain is avenged sevenfold, Lamech seventy times sevenfold. By Noah’s time there is so much violence God says he is ready to destroy the human race. Then ambition and pride in the building of the Tower of Babel caused such hostility that people divided into separate tribes that soon lost communication with each other.[2]

In spite of all, God looked at his creation and still “saw how good it was.” With faith in the basic goodness of human nature, God continues to give life. “Adam again had relations with his wife, and she gave birth to a son whom she called Seth. ‘God has granted me me another child in place of Abel,’ she said, ‘because Cain killed him.’”

When we let God tell the story from his point of view, there is always reason to “Offer to God a sacrifice of praise.”

Meditation: What does God’s view teach me about life and death?