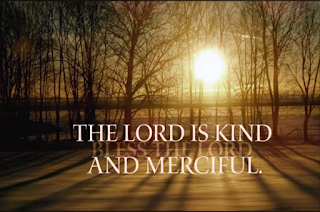 The Responsorial (Psalm 145) reminds us that "the Lord is kind and merciful." In contrast,
“Phariseeism” is legalism: a focus on rules with desire to enforce them for others. It is never joyful, never nurturing, never loving. There is always underlying anger in it. And unconscious resentment, which surfaces in anger against those who are not rule-bound. Paul fought the “false believers” who “slipped in to spy on the freedom we have in Christ Jesus, so that they might enslave us.”[1]

Phariseeism feeds on fear. And a sense of rejection. And unacknowledged anger at abandonment. We don’t say, but we feel, “The Lord has forsaken me; my Lord has forgotten me.” Without the intimacy of personal interaction with God, we fall back on the impersonal relationship of rules. We will “save ourselves” without his help. We will keep the rules so strictly that our “righteousness” will be our refuge.

Isaiah 49: 8-15 counters this by describing God’s closeness and saving love. “In a time of favor I answer you... I help you.” God addresses those whose sense of isolation from him has locked them into the defensive posture of legalism: “Saying to the prisoners: ‘Come out!’... For he who pities them leads them and guides them beside springs of water.” Stop focusing on rules. Drink from the spring of God’s own heart, revealed in his words. Read. Meditate. Pray. Don’t be so afraid. Your fear of sin, in the absence of reliance on God, drives you into the fortress-prison of rigid self-discipline. God will “cut a road” through all that blocks you from him. He has not abandoned you.

Can a mother forget her infant, be without tenderness for the child of her womb?
Even should she forget, I will never forget you.

In John 5: 17-30 Jesus defends his own freedom against those who persecuted him for healing on the Sabbath. He claims to be acting by a higher law: the law of union, of shared life with the Father who acts with him, in him and through him: “The Son cannot do anything by himself... only what he sees the Father doing”— and doing in him.

More: “Just as the Father possesses life in himself, so has he granted it to the Son to have life in himself.” And Jesus can share this life with humans: “The Son grants life to whom he wishes.... The one who hears my word... possesses eternal life.”

The prophets claim to act by the Light and Life of God within them. They can be deceived. But the worst deception is to deny the prophetic gift entirely and trust in nothing but slavish obedience to laws. This is to deny the faith. By Baptism we share in the life of God. We are anointed, consecrated by God as “priests, prophets and kings” (responsible stewards of his kingship). The fear that denies freedom to let Christ act with us, in us and through us is darkness overshadowing faith.

Initiative: Be what you are: alive with the life of God. Act in union with God.