We Offer Ourselves “Through Him, With Him, And In Him” 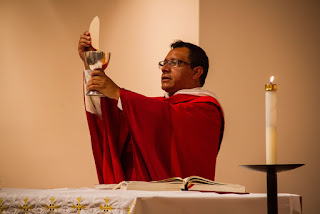 We Offer Ourselves
“Through Him, With Him, And In Him”

The Mass does not repeat the Sacrifice of Calvary. Hebrews is emphatic about that: Jesus does not “offer himself again and again, as the [Jewish] high priest enters year after year into the sanctuary with blood that is not his own.” Jesus came to bring to fulfillment everything prefigured by the Jewish sacrifices. He “has appeared at the end of the ages to take away sins once for all by the sacrifice of himself.”

That is it. One sacrifice, offered once. Never to be repeated. The sacrifice that takes away all sin — entirely and forever — because of the One who was sacrificed. The Priest and the Victim is Jesus, Son of God, plus all who were in his body on the cross, incorporated into him by Baptism as members of his body, “sons and daughters in the Son,” priests in the Priest, victims in the Victim, offering themselves with and in Jesus, dying in him and rising in him to live as the “new creation” of his risen body on earth.

(Note:  Jesus the head, plus all the members of his body, makes one Priest, one Victim).

Because Jesus offered himself, and with himself, in himself, all those who by accepting the “grace of the Lord Jesus Christ” would become members of his body, all who died in him are completely purified of sin. Their sins no longer exist. This is the sacrifice that is reenacted before our eyes in Eucharist.

The Encarta World English Dictionary defines “reenact” as “to act out an event that took place in the past, sometimes using the same people who originally took part in it.” This definition was not meant to apply to mystery, but it can apply to the “re-enactment” of the Mass.

In the Mass we “act out” the sacrifice of Calvary by the symbolic gestures of offering the bread and wine, with words that explain what is happening. But the mystery is that, when we do, the original, unique, never-to-be-repeated Sacrifice of Calvary is made really present. The Mass is not theater; it is the mystical “remembering” of God and his People that makes present, in its flesh-and-blood reality, the actual event that is being remembered. At Mass we are at Calvary. We are offering Christ and ourselves in him — because he is offering himself and us in him as members of his body — in the once-and-for-all act of offering he made on the cross two thousand years ago.

Hebrews continues: “Christ, having been offered up once to take away the sins of many, will appear a second time, not to deal with sin, but to bring salvation to those who eagerly await him.” Our guilt is gone. But the physical effects of sin—memories, habits, inclinations, fears—remain “in our flesh” until we are totally purified in the final “salvation” of death. When Jesus returns, the “Lamb without blemish” offered for sin, we will then “stand without blemish in the presence of his glory.” What the Mass recalls, makes present, and previews is the mystery of Jesus, Priest and “mediator of a new covenant.”[1]