The Messenger in the messengers 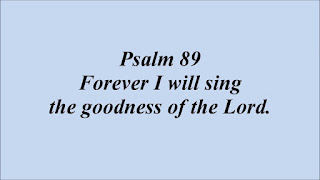 The Messenger in the messengers
THURSDAY, Easter week four: April 21, 2016

The Responsorial Psalm invites us, for the third day in a row, to praise God. On Tuesday and Wednesday it was for the breadth of the extension of the Good News to “all nations” and for the depth to which direct access to God’s word invites us. Today it is for the length of God’s fidelity in time and for the height from which the message comes to us: “Forever I will sing the goodness of the Lord” (Psalm 89).

In Acts 13: 13-25 Paul gives the history of God’s faithful guidance of his people through a long chain of messengers, culminating in the “Savior, Jesus.” But Jesus was on a uniquely higher level; no one could compare with him. Even John the Baptizer said, “I am not worthy to unfasten the sandals of his feet.”

Jesus is God who came as a human being; who “though he was in the form of God, did not regard equality with God as something to be exploited, but emptied himself, taking the form of a slave,” even washing his disciples’ feet as a servant. And he embraced weakness to a scandalizing degree: “He humbled himself and became obedient to the point of death-- even death on a cross” (Philippians 2: 5-11). It was to prepare his disciples for the shock of his apparent defeat that John’s Gospel shows Jesus declaring his divinity: “…so that when it happens you may believe that I AM.”

Like those before him, Jesus came as a messenger. But he was unique. Not only does Jesus emphasize repeatedly that he was sent by the Father; he also makes the claim, “Whoever sees me sees him who sent me” (John 12:45) because “the Father and I are one” (John 10:30).

Then Jesus reveals the mystery of our identification with him: “Whoever receives the one I send receives me.” We are not just messengers sent by Jesus. The mystery of our Baptism is that by “offering our bodies as a living sacrifice” we “became Christ” (St. Augustine, quoted by John Paul II). We are his living body, his real presence on earth. We are not one with Jesus exactly as he is one with the Father, although Jesus comes close to saying it (see John 6: 56-57; 15:15; 17: 20-22). Nor is his presence in us the same as his presence in the Eucharist; but it is just as real.

That is why it is so important for us as prophets to let his words be “made flesh” in us, in our actions and lifestyle. It is to reveal that in us, his messengers, Jesus the Shepherd is risen and continuing his presence and mission on earth— until the end of time: “Forever I will sing the goodness of the Lord.”

Initiative: Be a prophet. Let Christ’s presence appear in your words and actions.