Power and Prestige Marginalize the Poor 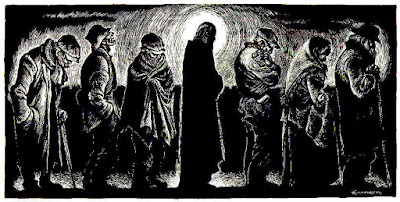 In the Responsorial Psalm we pray for what we know is already a fact: “Do not forget the poor, O Lord” (Psalm 10).

As we begin to read Micah, beginning with chapter 2: 1-5, we see that in response to “those who plan iniquity” and injustice against others, God is also “planning” against them. The Responsorial Psalm asks, “Why, O Lord, do you stand aloof? Why hide in times of distress?”

But God is not standing aloof and doing nothing while the “wicked harass the afflicted…. and boast, ‘He will not avenge it; there is no God.’” While we pray, “Do not forget the poor, O Lord,” God is already saying, “Behold, I am planning against this race an evil from which you shall not withdraw your necks!” The Psalm says to God: “You do see! You behold misery and sorrow, taking them into your hands. On you the unfortunate depend; you are the helper of the fatherless.”

This gives us a guideline and a focus for Christian ministry — one dramatically exemplified in our times in the famous “option for the poor” taken by the Latin American hierarchy in their meetings at Medellín and Puebla in 1968 and 1979. This decision called down American-supported violence in Latin America against clergy, nuns and lay ministers from “those who plan iniquity and work out evil” in the high places of business and government.1

But the Church has no choice; she also hears the cry, “Do not forget the poor.”

Matthew 12: 14-21 shows us that Christian ministers must always be on guard against yielding to fear of the “Pharisee party” in the Church. Today as in the time of Jesus they are “planning iniquity.” Under the disguise of “defenders of the law” they “plot against Jesus to find a way to destroy him.”

The “Pharisee party” is alive and well in the Church, and always has been, beginning with the “judaizers” in the time of St. Paul and continuing in all who are wedded to power and prestige. People who find security in a religion focused on law-observance and relish power in enforcing it are constantly denouncing Christian ministers who try to offset their deadly legalism. They “tie up heavy burdens, hard to bear, and lay them on the shoulders of others [while] they themselves are unwilling to lift a finger to move them.” Those whose primary concern is to make Christ’s “yoke easy” and his “burden light” for the wounded and weak in faith — for the “bruised reed” and the “smoldering wick” — will be “dragged before governors and kings” and Church authorities charged with anything from  disobedience to the “heresy” of liberalism!2

But the true spirit of the Church continues to be expressed in her prayer: “Do not forget the poor, O Lord.”

Initiative: Give God’s life: Be a “priest in the Priest.” Hear the cry of the poor and nurture them.

Email ThisBlogThis!Share to TwitterShare to FacebookShare to Pinterest
Labels: REFLECTIONS FROM THE LECTIONARY FOR ORDINARY TIME YEAR C-2; Immersed in Christ; David M Knight; His Way; Catholic Church; preferential option for the poor