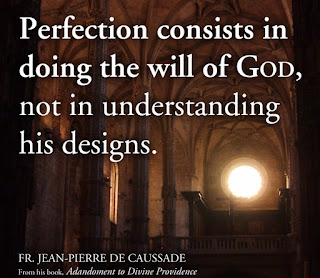 Fidelity Is Abandonment
Thirty-Fourth Week of Year II     Monday, November 21, 2016
Feast of the Presentation of Mary

The Responsorial Psalm arouses our appetite for the “end time”: “Lord, this is the people that longs to see your face” (Psalm 24).

Revelation 14: 1-5 speaks of the “end time,” which is a major theme as we draw near the end of the liturgical year. Last Sunday, the 34th, which is always replaced by the feast of Christ the King, began the last week of Ordinary Time. The readings called us to get in touch with the mind of Jesus who will judge the world when he comes to reign as King forever.  Next Sunday will be the First Sunday of Advent, and the Gospel will be looking toward the destruction of Jerusalem and the end of the world in one focus. The intent is to “wake us up” to be ready for Jesus as we celebrate his first coming at Christmas.

Today Revelation previews the victory of all who remain faithful stewards to the end. Their number, 144,000, comes from multiplying 12 (the number of the 12 tribes of Israel, the whole People of God), by12 (a number signifying perfection or completeness), and the sum of this by 1000, which just says we are talking about a whole bunch of people!

144,000 is a symbolic number expressing the totality and universality of salvation. It describes the fullness of the renewed Israel open to the nations.

The words the liturgy expurgates,  “Those who have not defiled themselves with women, for they are virgins,” are

not speaking of celibate males but rather of faithful Christians who have not succumbed to the empire’s seduction (shortly hereafter the empire is described as a “prostitute”). They have not prostituted themselves, entering into the game of imperial lies; they have not capitulated to the idolatry of the beast and his power (13:4, 8, 12, 15). That is why they follow Christ in his sacrifice and in his victory.[1]

This reading warns us not to deny Christ by giving in to the darkness and seductions of our culture. The temptation to use “spin” and cover-ups is inherent by nature in every position of power, whether in the Church, in business, or in government, and we must always be on guard against joining the “game of lies.” This means resisting the idolatry of being swayed by the promises or punishments of power.

In Luke 21: 1-4 Jesus gives an example of total stewardship. Long before the “poor widow” contributed her “two small copper coins,” she had already in her heart abandoned to God “all she had to live on.” This present gift just reflected her opinion about how he wanted her, here and now, to use for him what she had already turned over to him.

Initiative: Be Christ’s steward. Abandon all to God and live solely for him.