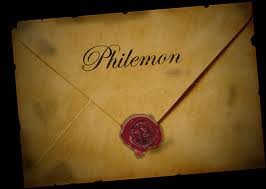 The Responsorial Psalm tells us “Blest are those whose help is the God of Jacob” (Psalm 105).

In Philemon, verses 7-20, Philemon thinks he owns his slave Onesimus and has the right to tell him what to do.

Paul starts by establishing identities and relationships. Surprises all around! The Romans think Paul is just their prisoner. Paul says he is a “prisoner for Christ.” Philemon thinks Onesimus is his slave. Paul calls him “my child.” (Paul brought him to life through Baptism. See Galatians 4: 19; 1Corinthians 4:15). Paul tells Philemon that when it comes to giving orders, “I have every right to command you,” because the issue at hand is “what ought to be done,” and Paul speaks for Jesus in this. But Paul prefers to “appeal in the name of love.”
Here Paul goes to what should be the core of all Christian relationships — with others and with God. Ultimately the only relationship that counts for anything is the relationship of love. All others are just ways of living it out.

Paul calls Philemon to rethink his perceptions; to see reality, not through the eyes of human culture and legal bonds (e.g. master and slave), but in the light of our faith. He suggests that perhaps God let Onesimus escape “for this reason: that you might possess him forever, no longer as a slave, but as more than a slave, a beloved brother.”

He adds, “Now you will know him both as a man and in the Lord.” The phrase “in Christ” is Paul’s theme-song. The Jesus Paul met on the road to Damascus (Acts 9: 1-5) revealed himself as identified with the members of his body on earth. We see Christ in others. In others we see Christ.

This is stewardship. Paul is trying to change Philemon’s whole perception of human society, of relationships and identities. When Christians succeed in making this perception universal, we will have “renewed the face of the earth.” That is the Kingdom of God.

When will this happen? Jesus, when questioned about it in Luke 17: 20-25 replied, “Don’t ask!” The kingdom of God is not something you can see coming like a social trend. You can’t measure its progress or predict its arrival through statistical analysis. The “reign of God” exists in the measure that each human heart is surrendered to God’s will as revealed through the Scriptures and the Holy Spirit. Try to get statistics on that!

Our job as stewards of Christ’s kingship is not to make surveys of our success, but just to keep persevering in faith and fidelity until Christ comes again.

And to trust in God: “Blest are those whose help is the God of Jacob.”

Initiative: Be Christ’s steward. Work for change without anxiety.