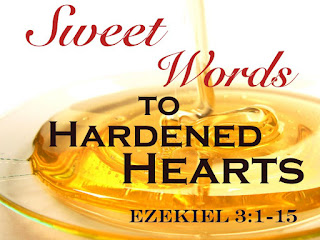 The Responsorial Psalm affirms the “ministry of the word”: “How sweet to my taste is your promise” (Psalm 119).

In Ezekiel 2:8 to 3:4 God told the prophet to eat a scroll on which was written a bitter message for Israel. Ezekiel did and found that “in my mouth it was as sweet as honey.”

The listeners did not really take in the message. All they heard were “words of lamentation and mourning and woe.” If however, like Ezekiel, they had opened themselves to God’s words, taken them into their hearts as he took the scroll into his mouth, given them a thorough tasting and assimilated them, they too would have found the message “as sweet as honey.”

God’s words always give joy, because they always lead to greater life. Jesus said to some of his disciples who had difficulty accepting what he said, “The words that I have spoken to you are spirit and life.” But they didn’t believe him. So they turned away (see John 6:51-66).

In Matthew 18:1-14 Jesus tells us who is more likely to receive his word and appreciate its sweetness: “Truly I tell you, unless you change and become like children, you will never enter the kingdom of heaven. Whoever becomes humble like this child is the greatest in the kingdom of heaven.”

At first glance, we might think nobody could be stupid enough to assume such a thing. And in the abstract, few would. But in practice, is this not what we do when we say truth is “what is true to you” and goodness is “what works for you”?

This is the working result of “relativism,” which is popularly defined as “the belief that concepts such as right and wrong, goodness and badness, or truth and falsehood are not absolute but change from culture to culture and situation to situation.” This is to say that whatever people believe and approve of is, for practical purposes, “truth and goodness” in their culture or peer group.1

Children have not yet learned their culture’s “creed and code” enough to be closed up by it. So they are open to the shocking word of God. As they grow into cultural conformism, however, they may reject God’s way — unless, through personal reflection and experience, validated in prayer, they have tasted its sweetness. Authentic ministry should guide them, and everyone, to do this.

Initiative: Give God’s life: Speak to others words received from God and tasted in prayer.

Email ThisBlogThis!Share to TwitterShare to FacebookShare to Pinterest
Labels: REFLECTIONS FROM THE LECTIONARY FOR ORDINARY TIME YEAR C-2; Immersed in Christ; David M Knight; His Way;Step 4