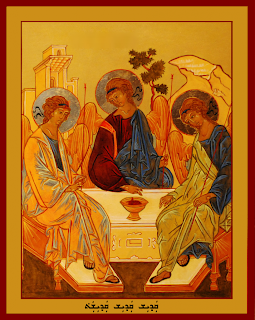 The Responsorial (Psalm 138) invites us: “In the sight of the angels I will sing your praises, Lord.”

The word “angel” means “messenger.” Since the Church “exists to evangelize” (Pope Paul VI), all Christians are “sent” as “ev-angel-ists.” (“Ev-“ is from the Greek “eu,” meaning “good). We are all “angels” of the Good News, commissioned and empowered for this by our baptismal consecration as prophets, priests, and kings (stewards).

Today the Church celebrates three angels who could well be the patrons of these three functions of our mission.

As prophets we live “in the sight of the angel” Gabriel, whose name means “El (God) is strong.” Gabriel is an “interpreting angel” who explains things to the prophets.[1] He is “the angel charged with the meaning of visions and of the unfolding of history.” As prophets we are called to be strong in faith, “giving flesh” to God’s words through changes that embody them in action. Gabriel called Mary to give flesh to the Word himself in a response of faith that changed human history.

As priests we are consecrated to heal through love, and to express our inner life to God and others. And so we live “in the sight of” Raphael, whose name means “El heals.” He is “the healer, the expeller of demons... one of the seven angels who offer the prayers of God’s people and enter the presence of the Holy One.”

As stewards of Christ’s kingship we are conscious of living “in the sight of” Michael, whose name challenges, “Who is like El?” He is “the ‘great prince who stands over your people’.... the heavenly spirit who watches over the Jews.... the leader of the angelic hosts in the battle between the dragon and his angels. In the Christian liturgy Michael is the protector of the Church and the angel who escorts the souls of the departed into heaven.” He gives us hope in our task of bringing about change in the Church and the world.[2]

Daniel 7:9-14 describes what we will praise God for: the outcome of our stewardship:
I saw one like a human being coming with the clouds of heaven.... To him was given dominion and glory and kingship... that shall never be destroyed.

In Scripture “there is not always a sharp distinction between the angel as a personal being and as a personification of the divine word or the divine action.” We who have “become Christ,” sent as his risen body to reveal his continuing presence and action on earth, should strive to make that distinction less and less visible in our lives. As “angels” we say with Paul, “It is no longer I who live, but it is Christ who lives in me.”[3]

As God incarnate, the Son made flesh, Jesus is the “link” between heaven and earth. In John 1:47-51 he tells Nathanael, “You will see heaven opened and the angels of God ascending and descending upon the Son of Man” as they did on “Jacob’s ladder.”[4] We are sent as prophets, priests and stewards of his kingship to be the link between the historical Jesus who came in Mary and the victorious Jesus who will come at the end of time.

Initiative: Be an angel. Ev-angel-ize by embodying your faith as prophet, expressing love as priest, persevering in hope as steward of the Kingdom.