Everything Has To Express Love 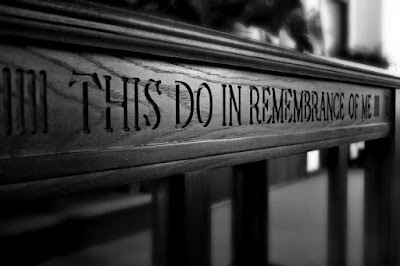 September 12, 2016  Monday Twenty-Fourth Week of Year II
Everything Has To Express Love
The Responsorial (1Corinthians 11:26) urges us: “Proclaim the death of the Lord until he comes again.”

In 1Corinthians 11:17-33 Paul is presenting Eucharist as the “sacrament of Church unity,” but of a unity whose reality is love. He says we “proclaim the death of the Lord,” when in fact we are proclaiming all together in the Mass his death, resurrection and future coming in triumph. In God’s time these are all one single moment to which we are present now. But it was in his death that Jesus showed the all-inclusive passion of his love, so Paul focuses on that.

The New Jerome Biblical Commentary says Eucharist was celebrated in the context of a communal meal held in private houses, where one room might not contain all. “The division thus imposed may have been exacerbated by the Roman custom of classifying guests socially and giving little or nothing to those considered inferior.” Before racial integration Catholics saw this in the South, where African-Americans were confined to the back pews. We still see it in cities where no one church can hold everyone, so we divide into neighborhood parishes that in effect separate the rich from the poor. And within each church congregations follow the “first law of gases,” occupying all available space by sitting as far from strangers and mere acquaintances as possible. Many participate as individuals, on their own terms, refusing to be caught up in the communal singing and responses, or to follow the common liturgical procedures, especially in the way they receive Communion. Paul says these differences (“factions”) may have to exist “so will it become clear who among you are genuine.” Today he would add, “Do you not have homes where you can pray privately?”

Mass is for celebration as a community.

To “eat this bread and drink the cup,” Paul says, is to “proclaim the Lord’s death” — that is, his love — until he comes. The NJBC says the omitted verses (27-32) about eating and drinking unworthily, “without discerning the body,” refer to not recognizing others as Christ’s body. He warns, “Examine yourselves.” Who are you excluding from the table as “inferior” or “unworthy”?

Luke 7:1-10 provides the words we recite before Communion: “Lord, I am  not worthy….” They were spoken by a pagan Roman soldier, but Jesus said, “I tell you, I have never found so much faith among the Israelites!” This calls us to ask whether we who are card-carrying “Christians” or “Catholics” might actually have less faith in Jesus Christ than some who profess not to believe in him! Or who perhaps are not in “good standing” with the Church.

Jesus said, “You will know them by their fruits.”[1]  In Luke’s Gospel John said, “Master, we saw someone casting out demons in your name, and we tried to stop him, because he does not follow with us.” Jesus answered: “Do not stop him; for whoever is not against you is for you.” In Mark he answers, “Do not stop him; for no one who does a deed of power in my name will be able soon afterward to speak evil of me.”

Initiative: Be an enlightened steward. “Proclaim the death of the Lord” by love.