“The Lord takes delight in his people.” 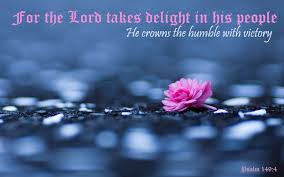 In 1Corinthians 6:1-11 Paul gives a whole list of sins that sound horrific. Then he says: “And this is what some of you used to be.” If he stopped there he could qualify as a bellows-pumper for “Catholic guilt.” We almost expect his next words to be, “Repent, you sinners!”

But Paul can never get beyond arm’s reach of the central mystery that obsessed him: the mystery of Christ not just present in us, but identified with us and identifying us with himself. He continues: “You have been washed, consecrated [better, “sanctified”], justified in the name of our Lord Jesus Christ and in the Spirit of our God.”

Paul doesn’t mean just “forgiven.” We understand forgiveness. We give and receive it ourselves as human beings. But forgiveness does not change the one forgiven. It is a change in the forgiver’s attitude or will. Paul is talking mystery. “Washed” for Paul doesn’t mean our sins were “washed away” by the pouring of water. This is a common Scriptural image, but a metaphysical impossibility. You can’t “wash away” sins that are part of one’s life history. When Paul says “washed,” he means “immersed.” In Baptism we went down into the water as into the grave. We died in Christ. Our old life, the “old leaven,” was annihilated, and we rose with the new life of grace, divine life, to live as a “new creation.”

Since one died for all; all died…. Because of this we no longer look on anyone in terms of mere human judgment…. Anyone who is in Christ is a new creation…. For our sakes God made him who did not know sin to be sin, so that in him we might become the very holiness of God.[1]

For those who feel unworthy because of their sins, the Responsorial (Psalm 149) is a summons to believe in the mystery of our purification: “The Lord takes delight in his people.”

In Luke 6:12-19 Jesus chooses twelve sinners (what else did he have to choose from?) and assigns them roles of stewardship in his Church. Here Jesus sends them out as “his apostles,” which really meant as an extension of himself. He “sent them out to proclaim the kingdom of God and to heal,” giving them “power and authority over all demons and to cure diseases.” In other words, to do just what he was doing.[2]

He made them responsible for establishing the reign of God on earth, and called them to leadership — the two words that best express the meaning of our baptismal consecration as “kings” or stewards of the kingship of Christ. When Paul says we are “consecrated” or “sanctified” in the “name of our Lord Jesus Christ and in the Spirit of our God,” he means we are both chosen, set apart, for a mission to be accomplished in the name (person) of Jesus, and made holy by his Spirit.

Initiative: Be a steward of the mystery. Trust in the grace of your sanctification.