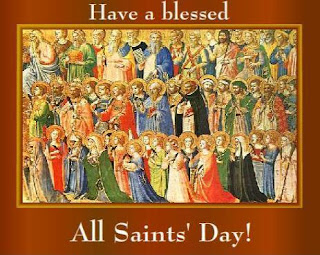 Inventory
What does the feast of All Saints say to you? How does it motivate you?

Input
The Entrance Antiphon invites us to focus on joy expressed in praise: “Let us all rejoice.... Let us join with the angels in joyful praise.” It should give us joy to think about all the “saints” who are in heaven. But why?

The Opening Prayer(s) give us two different reasons for appreciating the saints. They reflect two different ways of looking at ourselves and our religion — both good, but the second perhaps better than the first. In the first prayer we ask God, “May their prayers bring us your forgiveness and love.” We see the saints as interceding for us in our sinfulness. In the second we ask, “May we who aspire to have a part in their joy be filled with the Spirit that blessed their lives....” We see the saints as evidence that our religion gives joy through the gift of the Holy Spirit.

The difference between the two prayers reflects the most significant change of perspective that the Second Vatican Council (1962-1965) brought to Christian life and ministry. Admitting to some over-simplification, we can say that the focus of the generations before the Council was on “getting to heaven,” while the focus now is on “growing to perfection.” Before, we were preoccupied with asking for forgiveness of our sins. Now we are preoccupied with asking to be like the saints, “so that having shared their faith on earth we may also know their peace in your Kingdom.”

The Kingdom comes to perfection in heaven, but we are working now, as faithful “stewards of the kingship of Christ” to bring it to be on earth. And the Council has emphasized the special role of the laity in this:

The laity likewise share in the priestly, prophetic, and royal office of Christ and therefore have their own share in the mission of the whole people of God in the Church and in the world.

They exercise the apostolate in fact by... penetrating and perfecting the temporal order through the spirit of the Gospel. In this way, their temporal activity openly bears witness to Christ and promotes the salvation of all. Since the laity, in accordance with their state of life, live in the midst of the world and its concerns, they are called by God to exercise their apostolate in the world like leaven, with the ardor of the spirit of Christ.

The laity derive the right and duty to the apostolate from their union with Christ the head; incorporated into Christ's Mystical Body through Baptism and strengthened by the power of the Holy Spirit through Confirmation, they are assigned to the apostolate by the Lord Himself (Decree on the Apostolate of the Laity, nos. 2-3).

To fulfill their mission, the laity must be holy. The Catechism of the Catholic Church  affirms that the fruit referred to when Jesus says that if we “abide in him, and he in us, we will “bear much fruit” is the “holiness of a life made fruitful by union with Christ” (no. 2074). The laity’s call to holiness is a key element in the Council’s new presentation of Christianity.

Before the Council it was commonly taught and accepted that only those who took vows in religious orders were following the “way of perfection.” This was also called the “way of the counsels,” based on the unchallencged interpretation of Jesus’ words to the young man in Matthew 19:21,  “If you wish to be perfect, go, sell your possessions, and give the money to the poor, and you will have treasure in heaven; then come, follow me.”  Because he was rich and unwilling to make the sacrifice, the young man “went away sad.” But not sinful. The interpretation was that “selling all” was Jesus’ advice (counsel) to those who wanted to  be perfect, but those who were willing to settle for less could still be saved by following the “way of the commandments.” To be on the “A team” you had to take vows as a priest, brother or nun. The laity were the “B team.”

The bishops at Vatican II shot this interpretation out of the water. “To be perfect” means to follow the only perfect way of life, which is Christianity as such: the life of grace. To accept Baptism is already to “sell all” in a radical way, because Baptism is a choice to die with Christ and in Christ in order to come back to life as his risen body on earth with nothing to live for except to let Jesus live and continue his mission in us. As Paul wrote, “It is no longer I who live, but it is Christ who lives in me” (Galatians 2:20). The Council was explicit:

Every Catholic must therefore aim at Christian perfection (cf James 1:4; Romans 12:1-2).
Thus it is evident to everyone that all the faithful of Christ of whatever rank or status are called to the fullness of the Christian life and to the perfection of charity. (Decree on Ecumenism no. 4; The Church no. 40).

If there are any “first string” and “second string” Christians. it is  based on each individual’s response to Jesus, not on the particular state of life to which one is called. The word “saints” means “holy ones,” and it was the word St. Paul  preferred when referring to Christians in general. We are all made holy by sharing in God’s divine life, and we are called to be as holy as Jesus, whose body we are, in everything we say and do. Jesus said, “Be perfect, therefore, as your heavenly Father is perfect” (Matthew 5:48). We are all called to be saints. St. Paul calls us saints already.

The next two prayers continue the contrast. The Prayer over the Gifts focuses on the saints’ “concern to help and save us.” But in the Prayer after Communion we “praise your glory reflected in the saints” and ask to be “filled with your love and prepared for the joy of your Kingdom.” Oversimplifying again, we can say that since the Council we have shifted the emphasis from healing to holiness and from groveling to growth. The Responsorial (Psalm 24) describes us well: “Lord, this is the people that longs to see your face.” We are not looking down, bewailing our clay feet. We are looking up, longing to see the face of God.

A Preview and Promise
When Revelation 7:2-14 gives numbers for those saved, these are not meant to be statistics. The Jerome Biblical Commentary explains:

The number 12 is the symbol of perfection.... The second 12 corresponds to the tribes of Israel, the People of God. Finally, 1000 indicates a very large number, and 144,000 [12 X 12 X 1000] symbolizes the number of the elect whose real number is known to God alone. [The words “from every nation, from all tribes and peoples and languages” mean that] the number scarcely refers only to Jewish Christians; rather it stands for all the members of the Church, the true Israel.

The Responsorial tells us who is found in that number: “Lord, this is the people that longs to see your face” (Psalm 24):

Who can ascend the mountain of the Lord or stand in his holy place?
Those whose hands are sinless, whose heart is clean, who desire not what is vain.... who seek the face of God.

A Picture of the Saints
This is basically the picture Jesus paints in the Beatitudes (Matthew 5:1-12). They all speak of desire for God or what helps people have that desire. The “Kingdom of heaven” belongs to those who are open to the “more” because they “know they haven’t got it made” (the poor in spirit); to those who are made reflective by sorrow and preserved from the cancer of power by a spirit of nonviolence (the “meek”); to those who aid others out of a sense of relatedness (show “mercy”) and seek peace; to those who “hunger and thirst for holiness,” rejecting with undivided hearts the idolatry of enslavement to any created value, person or project.

This is the holiness all of us must pursue:

Every Catholic must therefore aim at Christian perfection,,,,
Thus it is evident to everyone that all the faithful of Christ of whatever rank or status are called to the fullness of the Christian life and to the perfection of charity.

“Lord, this is the people that longs to see your face.”

Pure because He is Pure
1John 3:1-3 tells us that when we do see his face, “we shall be like him, for we shall see him as he is.” John says that “all those who have this hope” — that is, this desire characterized by practical belief in its attainability because it is  “based on him” —  will “keep themselves pure, as he is pure.”

“Pure” means unmixed. It is the characteristic of the “single-hearted” or “pure of heart” to whom Jesus promised, “They shall see God.” It is also the First Commandment: “You shall love the Lord your God with all your heart, and with all your soul, and with all your mind, and with all your strength” (Mark 12:30). It forbids any dividedness, because that is idolatry.
God is One in the absolute undividedness of his Being. He is infinitely “pure,” unmixed, undivided, whole and entire in his Being and in his every action. That is why those who respond to the One God must be one in heart as he is. They must “keep themselves pure, as he is pure.”

The closing line of John’s letter is, “Little children, keep yourselves from idols” (1John 5:21).

Insight:
Christian life is characterized by pure longing, undivided desire to “see God’s face,” to know him as he is, so that we might love him as he deserves and serve him according to his will.